Photographs and related memorabilia from the personal collection of NASA Senior Photographer Bill Taub: Live online auction Sat. Oct. 24 at 11:00 AM. Sign up for notifications. Register to bid on Invaluable.com

Tap or click on image below for Press Release. 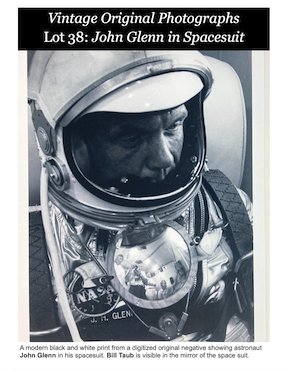 Who was Bill Taub?
Bill Taub was the senior photographer for NASA for over 32 years. The first person to hold this position, he took the majority of the official NASA photos dated between 1958 and 1970. He was well known and highly respected both within NASA and in the broader space exploration community.
Though he was rarely credited by name, Mr. Taub took nearly every official picture of the astronauts who led the nation’s early forays into space and played a central role in shaping public perception of NASA’s work. He was often the only photographer with access to training sessions and closed engineering meetings during the Mercury, Gemini and Apollo missions, and his images showed the anxiety of those who orchestrated the space program’s first-ever feats. In one photograph, taken immediately after the launch of the Saturn booster, a throng of NASA personnel crane their necks in anticipation and apprehension.
“We were really pioneering in so many ways, even the training exercises, there was tension -- and I think Bill captured that,” astronaut Alan Shepard, whose 1961 Mercury flight made him the first [American] man in space, said in a NASA video about Mr. Taub.
Charged with documenting NASA’s work for publicity and posterity, Mr. Taub was often one of the last people to see the astronauts before liftoff, earning the nickname “Two More Taub” for his insistence, always, on snapping just a couple more shots.
His photographs appeared in Life, Look and National Geographic magazines, among others. They captured such iconic moments in American history as John Glenn entering the Friendship 7 capsule that carried him into orbit in 1962 and such tragedy as the aftermath of the 1967 Apollo 1 accident, in which three astronauts were killed during a training exercise.

How do I know the photo I purchase is authentic?
Each photo offered through this auction is from Bill Taub’s personal collection and comes with an official certificate of authenticity signed by Bill Taub’s daughter, Myra Taub Specht, and Allan Stypeck, the proprietor of Second Story Books, Inc.

What types of prints are you selling?
This auction includes two types of photographic prints. The items described as “vintage original prints” are prints made shortly after a shot is captured and the negative developed. Though it is not possible to say exactly how many of this category are in existence, they are highly valued by space memorabilia and photography collectors. The majority of the prints of this type in Taub’s collection are in fine condition; please see individual condition reports for detail.
Other prints in this auction are modern prints from digitized original negatives. Bill Taub took these photos and created the negatives, but in this case the images were not printed in his lifetime. Instead, the negatives were scanned and high-quality prints were created from these scans. Some collectors and dealers refer to these as “second generation” prints.
Throughout the catalog for this auction, both vintage original prints and modern prints from digitized original negatives are clearly identified.

Why are there numbers on some photographs, and what do they mean?
Some NASA photographs were assigned identifying numbers before being released to the public. Because these photographs were often widely circulated shortly after they were taken, and because the numbers allow collectors to identify them easily, they are considered highly collectible. These numbers are visible in the margin on the front of a print, or stamped onto the reverse of the print. For those photographs with numbers in front margins, the numbers are printed in red ink on color photographs and in black ink for black and white photographs (though there are some exceptions). The numbers stamped onto the backs of photographs are generally in purple ink.
The numbers themselves generally indicate when the photo was taken and/or what mission it relates to. For example, a photo with the number S-65-30429 was taken in 1965, and a photo with the number 61-MR3-107 relates to the Mercury-Redstone 3 mission in 1961. 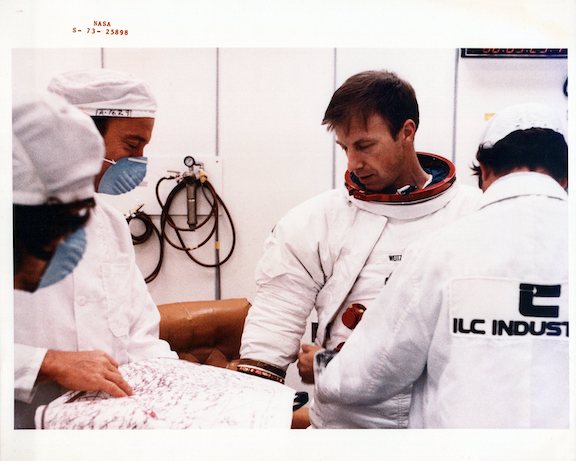 What does it mean if a photo is not numbered?
Some of the photographs offered in this auction are behind-the-scenes shots that never became part of press releases. As NASA’s senior photographer, Taub took thousands of pictures of every NASA mission, and only a few of those were ever distributed to the press and public. Taub was able to keep a personal archive of those that were not published, and some of the unnumbered photographs in this auction fall into this category. Some of the contact sheets (pieces of photographic paper with multiple negatives exposed together on the same sheet) in this auction show editorial marks--places where Taub or one of his colleagues indicated which one or two photos out of an entire roll of film would be enlarged and released.

Why do some photographs have a watermark on the back?
Some, but not all, vintage original NASA photographs were printed on glossy paper with a Kodak watermark on the back. There are two variants of this watermark: “A Kodak Paper” and “This Paper Manufactured by Kodak.” Other prints were released on paper produced by GAF Corporation with a watermark that reads “gaf.” Still other photographs have no watermark at all. While the absence of these watermarks absolutely does not mean that a print is inauthentic, collectors often consider their presence as an additional proof of authenticity. As a result, prints on paper with a watermark are regarded as particularly valuable. 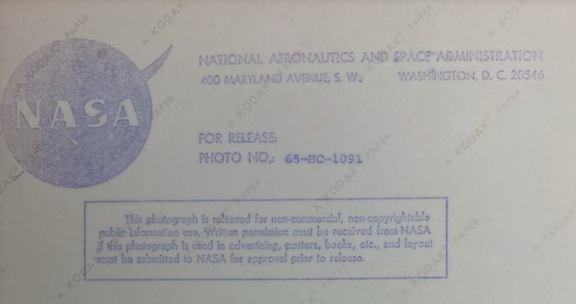 How do I bid on a photograph? If I win, how do I pay?
This auction is being hosted on Invaluable.com. All lots will be available for online preview and advanced bidding beginning on October 3. The live auction will take place on Saturday, October 24 at 11:00 am EDT. There will be no in-person bidding at Second Story Books, but a live auctioneer will run the auction via a video feed.
Most bidders prefer to bid online. To do this, you will need to create an account on Invaluable and register to join the auction (only possible after October 3). You may place advance bids before the auction or bid in real time during the live auction--or both!
If you would prefer, you may also bid by phone or leave written bids with the Second Story Books staff. Both of these must be arranged at least 48 hours before the live auction begins. If you are interested in either of these options, please send an email to invaluable@seconstorybooks.com.
The successful bidders will receive an invoice by email after the live auction ends and shipping costs have been calculated. The invoice will include links for online payment by credit card and PayPal. We are also able to take credit card information over the phone.
If you live in the DC/Virginia/Maryland area and would prefer to pick up your purchases in person, we are happy to arrange for that. Simply send an email to invaluable@secondstorybooks.com, and we will schedule a day and time for you to pick up your item(s) from our headquarters in Rockville, MD.

Can I view an item in person before I bid?
Yes, and we hope you will! To schedule a viewing of any lot in this auction, please email invaluable@secondstorybooks.com. All viewings will take place at our headquarters in Rockville, MD.

Are condition reports available?
Yes. We pride ourselves on providing accurate and detailed condition reports for all items that we offer at auction. If, after viewing the photographs and reading the condition report given on Invaluable.com, you have further questions about any item, please feel free to reach out to us. We are happy to answer specific questions and provide additional photos as necessary.

How do I maintain the condition of my photograph?
The high gloss of photographic paper is very susceptible to damage. To protect it, it is best to handle the print using cotton or latex gloves, and to avoid touching the print anywhere but at the extreme edges. To avoid fading, please do not store your print in direct sunlight. Creases, scratches, fading, and fingerprints all damage the print and reduce its value. The photo will be shipped to you in an archival acetate sleeve and carefully packaged for maximum protection during shipping.

To view photos and descriptions of items in this auction, click or tap on the button below.

Sign up for auction previews from Second Story Books using the Invaluable Signup form above.

Phone bidding is also available upon request. Please contact invaluable@secondstorybooks.com with name and phone number for information about placing bids by phone.

Tap on the above Second Story Books logo to go to our Invaluable Auction page, where you may sign up to bid.

Download the Invaluable Auction Apps from the Apple App store or Google Play for live bidding.